The river was in dire straits in the 1960s and 1970s. The water was polluted, the environment unbalanced and there were almost no fish. Until... the countries in the catchment area decided to do something to turn the tides. River life has been getting better ever since.

Discover the new story of the Rhine.

Historically, the Rhine is Western Europe's most important waterway. The source of the river is in the Swiss Alps. It falls from the spectacular Schaffhausen waterfall, flows, among others, along the French-German border and through the Ruhr region, and in the Netherlands it discharges in the North Sea and the Wadden Sea. Many tributaries can be found along the way.

The Rhine has been heavily travelled and fished since time immemorial. Starting in Roman times, a long string of rest, transhipment- and trading places have emerged along the trajectory. Followed in the 19th century by cities with expansive, often imposing, industrial areas. The Rhine's catchment area is still a major economic lifeline for Central and Western Europe today.

The Rhine is between
14 and 16 million years old.

The river's source is in the Swiss Alps and it is approximately 1,233 kilometres long.

The river is fed by many tributaries, including the , Aare, Neckar, Main, Lahn, Moselle and Ruhr. In the Netherlands, it divides into, among others, the Waal and the IJssel.

The catchment area has a surface area of 200,000 km² and has more than 60 million inhabitants.

Major cities, such as Basel, Strasbourg, Karlsruhe, Mannheim, Koblenz, Cologne, Nijmegen and Rotterdam are located on the Rhine.

200 years ago, the Rhine was a free-flowing river with islands, floodplains and a rich salmon population.

in the 19th century.

Industry, shipping, agriculture and cities appeared, releasing wastewater into the river. The Rhine was slowly transformed into an open sewer. Aquatic life paid the price. The river changed from a rich source of life into a hostile environment for flora and fauna.

The meandering Rhine began to look more and more like a canal with paved banks and straightened bends. Dams, dikes, locks and hydropower plants were built at many places in the catchment area.

Floodplains made room for agricultural land and housing. The original landscape disappeared. Habitats for plants and animals became smaller and smaller.

Fish met impenetrable barriers on their migration from the mountains to the sea. The Rhine was once Europe's most populated salmon river, but by 1950 these fish had completely disappeared.

The decline reached the absolute bottom with the fire at chemical company Sandoz (Basel) on 1 November 1986.

Extremely poisonous extinguishing water washed into the Rhine, turning it blood red and killing hundreds of thousands of fish. 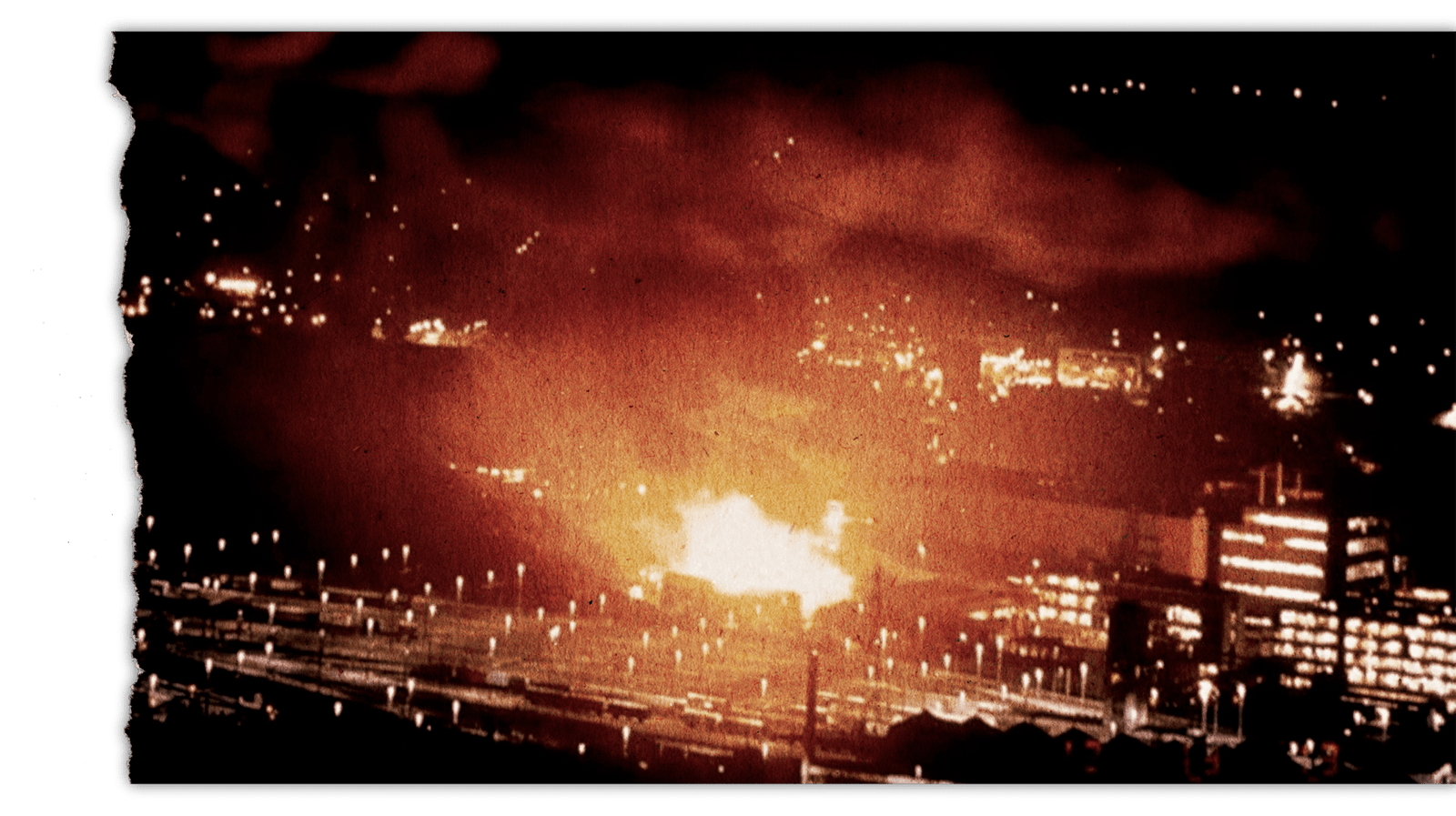 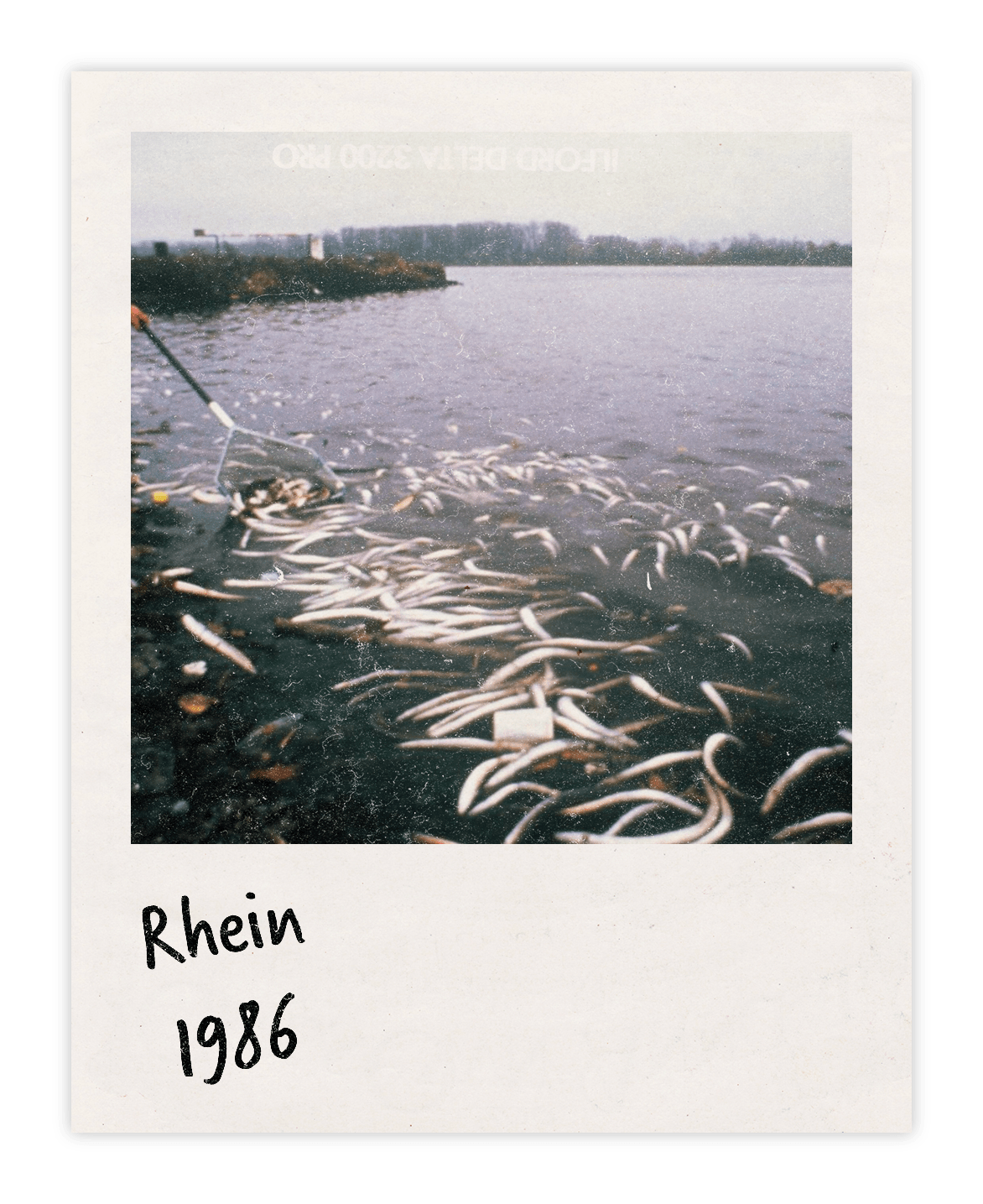 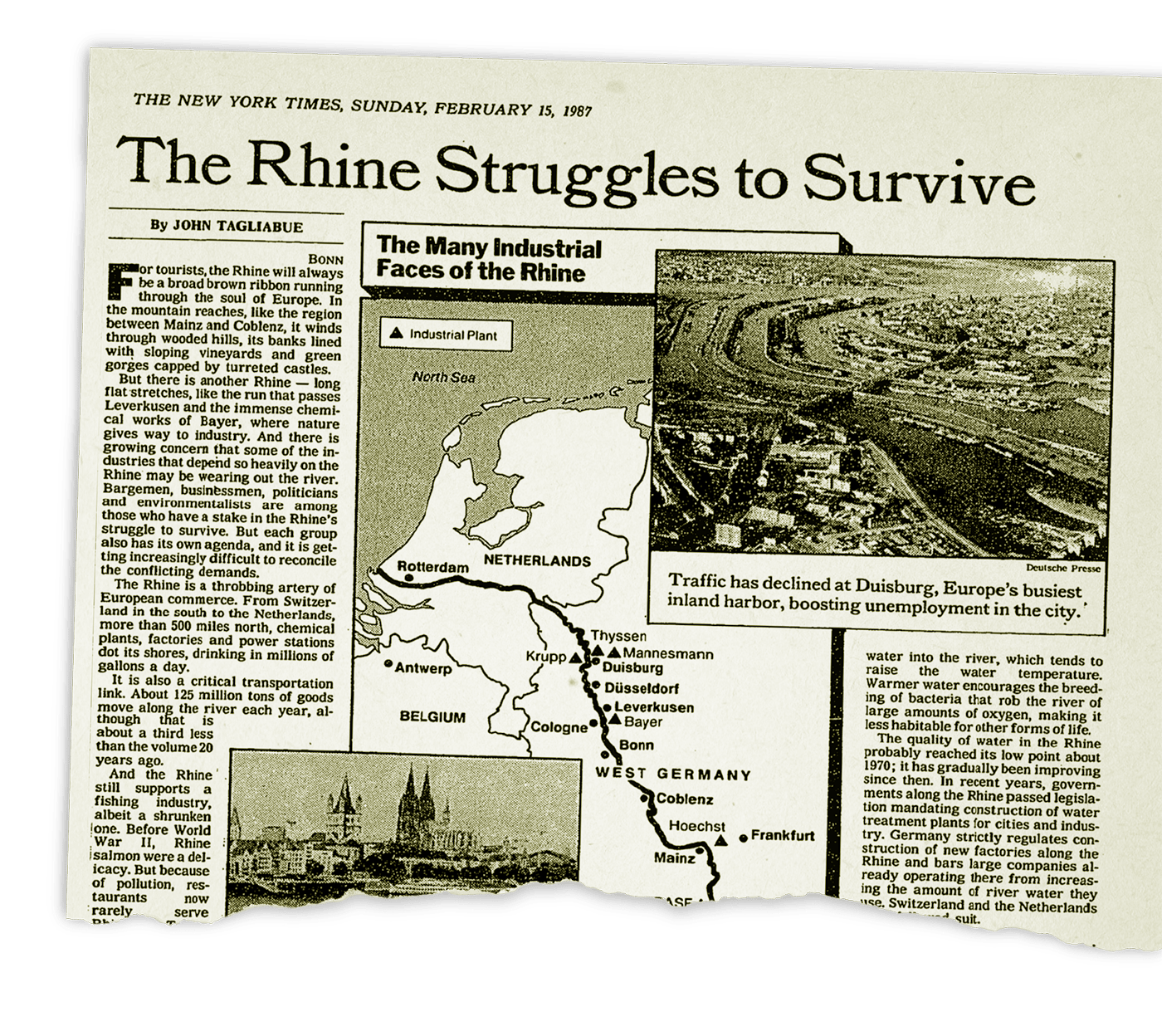 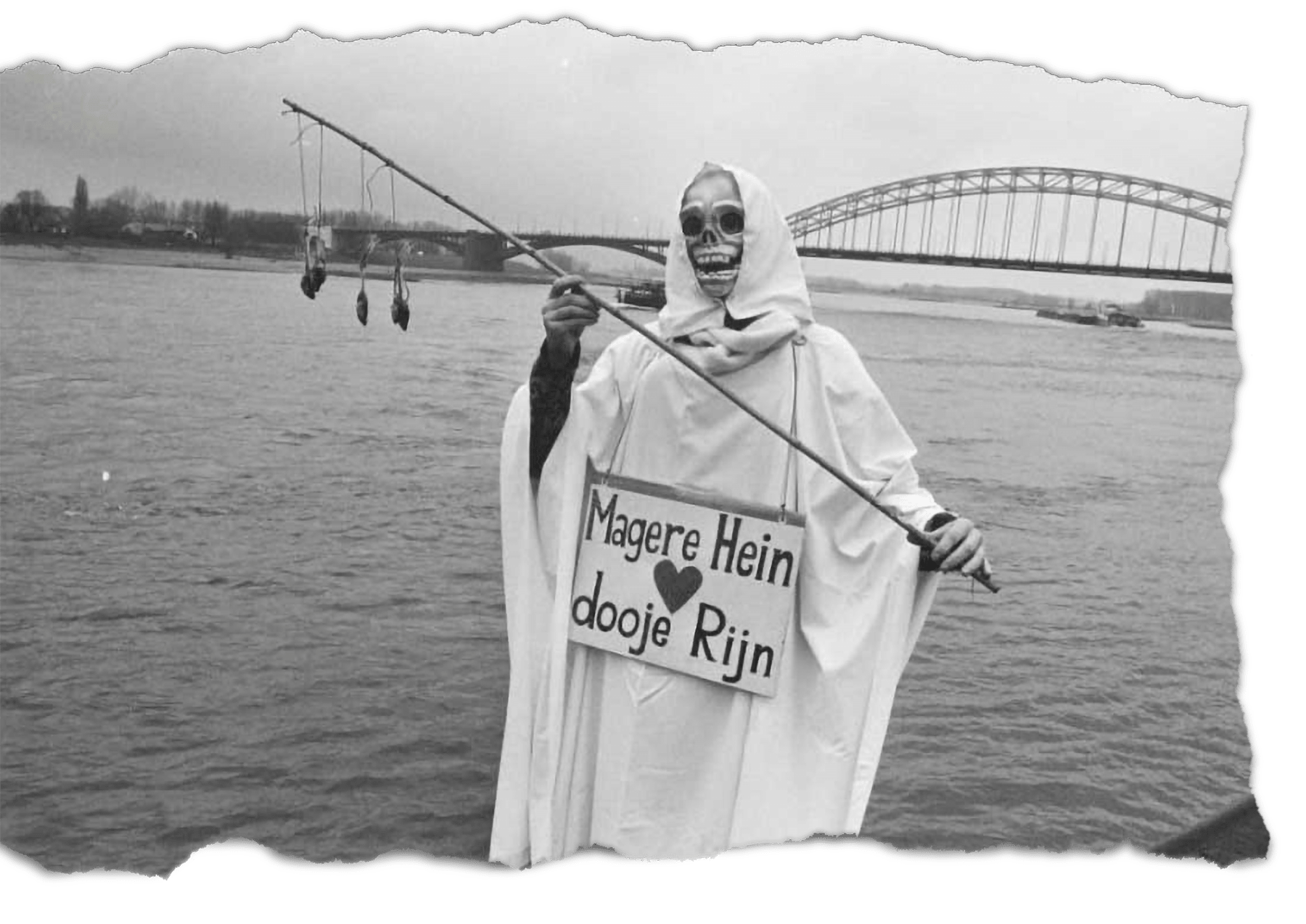 As awful as it was,

what turned the tides!

The residents sounded the alarm. Emergency actions and measures had to be taken. If not, not only would the aquatic life be in danger, so would the provision of drinking water.

The alarm call worked! The ministers of the environment from the countries in the catchment area, that had been collaborating in the International Commission for the Protection of the Rhine (ICPR) since 1950, drew up the Rhine action programme with the following objectives:

The collaboration and the action programme had fast results.

Since around the year 2000, the river is visibly cleaner for humans, plants and animals. But still not clean and accessible enough…

The ICPR introduces a new action programme, Rhine 2020, which is supported by the European Union's efforts to improve the water quality (Water Framework Directive) in Europe and to diminish the flood risks (Floods Directive).

The Rhine is once again attractive for tourists. Tourism is profiting from the cleaner, more biodiverse and more accessible river.

Young and old, businesses and authorities are becoming more and more aware of the new story of the Rhine. They want to contribute to the restoration of this wonderful river.

A good example of this is the energy residents of the catchment area are investing in citizen initiatives to increase water quality, biodiversity and overall experience of the Rhine!

The Rhine knows no borders and collaboration between countries really does work.

The ICPR is the motor driving the restoration of the Rhine. The river connects all of the people in the catchment area. The unique story of restoring the Rhine is proof that European collaboration is effective!

Visit the information centres in the catchment area, from Switzerland to the North Sea and the Wadden coast.

There is an abundance of diverse opportunities, so there's something for everyone; from information about protecting nature and water to expositions about fish populations and the freshwater environment.

This visitor centre offers an interactive experience about the Wadden Sea UNESCO World Heritage Site, the Fish Migration River (unique in the world), the IJsselmeer area and, not to be forgotten, the Afsluitdijk itself.

Observe the brooding sterns from inside an egg at the best birdspotting location in Haringvliet!

In the Bastei you will learn all there is to know about how this landscape was formed, its flora and fauna and the river area near the Waal.

The Keeken information centre is part of the ‘Experience the Rheinaue’ network. There is also a great deal to discover along the Rheinaue in addition to the permanent exhibition ‘The Gelderse Poort – A landscape on the river’. You can plan exciting cycling routes with the interactive route planner and accompanying app!

Many exciting excursions are organised in the area near the NaturForum. You can also learn more about the Nederrijn floodplains in the permanent “AuenGeschichten” exhibition.

A contribution from Foundation Wasserlauf NRW for the reintroduction of salmon in the Rhine and the Sieg.

You will learn all about migrating fish and water protection in this wonderful information centre. The permanent exhibition has, among others, a mural about the journey of migrating salmon.

This large, natural history research museum shines the spotlight on zoological and molecular biodiversity research as well as the fish fauna in freshwater areas around the world.

Experience the fish corridor in Koblenz and dive into the world of migrating fish.

Window to another world: see fish from so close by that you can almost touch them, admire them in their natural habitat and during their migration.

Learn more about the Rhine with our permanent and temporary interactive exhibitions in this environmental education centre.

Interactive exhibition for young and old with astounding details about the origins of the bordering Natura 2000-area, the bird and plant world and the role they play in our quality of life.

This centre is located in a monumental Bauhaus edifice in the middle of the charming floodplains landscape of Rappenwört. A permanent multilingual exhibition with many interactive elements shows how the Rhine was formed, the importance and ecological value of the floodplains and the threat facing them.

The center, which has had the CINE label since 2003, is close to the national nature reserve of the Sauer Deltas. There you can discover not only the extraordinary flood plain landscape, but also the various nature reserves of northern Alsace

Ecology and energy production are not opposite poles: see one of Europe’s largest fish corridors and Germany’s most productive river hydropower plant.

Take a glimpse under water through the fish corridor window, stroll through the Rhine exhibition and discover the aquarium!

Visit the city of Rust and the Taubergießen nature reserve, participate in one of our many activities, such as herb ateliers and discovery walks.

This nature centre welcomes its visitors at events, exhibitions, workshops and conferences about nature, the environment and a greener society, all in a European framework.

This originally imperial fish nursery in a 904 ha nature reserve plays a central role in the salmon reintroduction programme and certainly makes waves with its many exhibitions about both the Rhine and salmon.

Discover the largest floodplain area in the Swiss Plateau! Our exhibition offers nature experiences for young and old with a “do” path, many guided tours and diverse infrastructure.